Nearly 15 years ago, Dhyandra Lawson got her start at the Los Angeles County Museum of Art.

Then newly graduated from Occidental College in LA, where she studied art history and visual art, Lawson was in need of a job and eager to get a foot in the door at the museum. So she worked in the museum box office. She took her temporary role seriously, treating every day as something of an interview and an opportunity to make connections with art professionals. Eventually, a full-time position opened on the museum’s development team, where she worked for four years.

Lawson was up for a promotion in fundraising when she made the leap to the photography department’s curatorial team in 2012. The transition was a rare opportunity.

“At that time, it was hard because they weren’t really hiring people in entry-level positions in curatorial who didn’t have graduate degrees,” Lawson says.

Working at the largest art museum in the western United States, she had unfettered access to LACMA’s encyclopedic collection of more than 147,000 paintings, sculptures, photographs and other art spanning continents and centuries. As a curatorial assistant, Lawson collaborated with museum curators, managing, researching and caring for LACMA’s collection of art and helping plan exhibitions.

It wasn’t long before Lawson found disparities in the collection and began working to help broaden the artists represented.

Today, Lawson is planning a new exhibition as an assistant curator, a promotion she received after graduating from the ASU-LACMA Master’s Fellowship in Art History, which provides emerging museum professionals research support, mentorship from experts and a graduate degree.

As an assistant curator instead of a curator assistant, Lawson’s work focuses primarily on research and writing, and more leadership and ownership in exhibition-making and growing the collection. 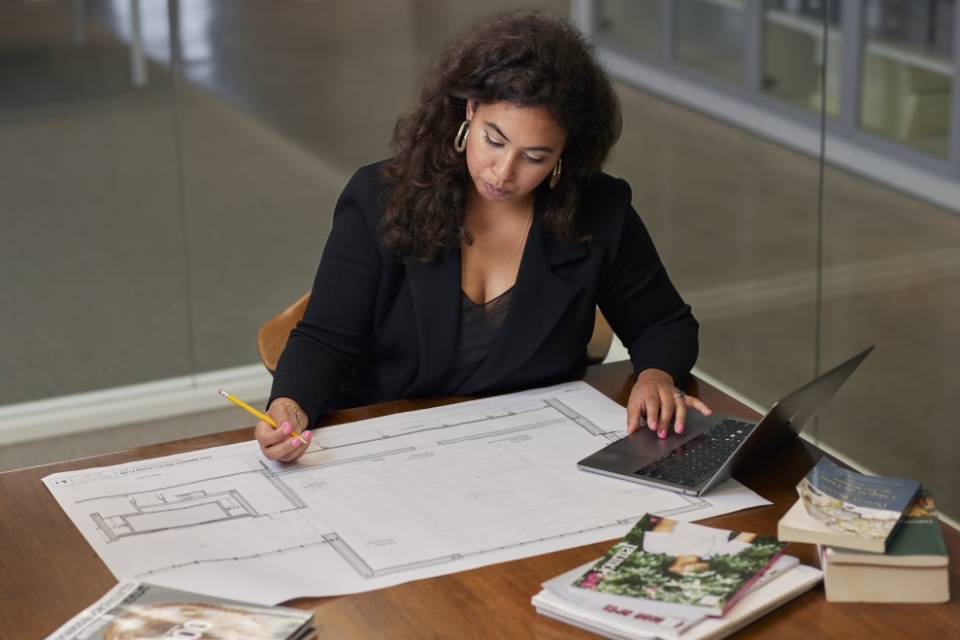 “Now that I’m formally a curator, every exhibition is an opportunity to share something with the public and to make a statement, or to hopefully inspire some magic, some joy, to highlight something that isn’t widely being published or talked about,” Lawson says.

Art that conveys what it means to be alive

Lawson’s area of expertise is in photography and video art after 1970. The museum’s photography collection ranges from the medium’s beginning in the 19th century to present day, focusing primarily on practitioners in the U.S. and Europe. Although the museum has expanded its representation of Latino makers and Black artists in recent years, “like most photography departments, the founding collections have been artists who are of European descent or white Americans,” Lawson says.

“I noticed right away a bias in the way that the collection had been compiled over the years, and that’s spanning legacies of curators and collection building,” she says.

At LACMA, Lawson’s day often began with a stroll through galleries dedicated to African and ancient Egyptian art. Looking back, her walk to her office was also something of a metaphor, of “how I saw myself in the museum,” Lawson says.

She thought about what it meant to be a Black woman living in L.A. She thought about the Black diaspora, a community of people around the world who have moved or been forcibly displaced from their ancestral homeland.

These experiences planted the seeds for her exhibition, titled “Imagining Black Diasporas: 21st Century Art and Poetics.” Set to open at LACMA on Nov. 12, 2023, and run through March 24, 2024, the expansive exhibition including photography, painting, installation, sculpture and time-based media will be focused on the aesthetic connections among living contemporary artists across the Black diaspora. In addition, Lawson is working on the 104-page catalog that will be published for the show.

The show will center stunning works by artists from the U.S., and across Africa, Europe, the Caribbean and Canada. Sandra Brewster is one such artist who will be included in the show. Based in Toronto, the visual artist explores identity and representation, highlighting the Black experience in Canada. Another, Susana Pilar Delahante Matienzo, is a Cuban visual artist whose work in photography, video and performance often responds to the history of violence against women.

While many art exhibitions centering the Black diaspora focus on slavery, migration or trade, Lawson’s exhibition explores ways artists respond to their life experiences, both the difficult and joyful moments, ultimately bringing a sense of empowerment to both the artists and their works.

“I haven’t seen a show that’s taken a fundamentally aesthetic approach or understanding that aesthetics are conveying what it means to be alive,” Lawson says. “People tend to reduce aesthetics down to what things look like, but I think the way artists arrange things or rearrange things aesthetically tells us for them what it means to be alive. And that’s super important for Black peoples around the world whose stories have been historically marginalized.”

Lawson’s exhibition expands upon her research as a student in the ASU-LACMA Master’s Fellowship in Art History. Lawson was part of the inaugural class that began in 2018, taking coursework while continuing to work full time at the museum. For Lawson, the fellowship presented an opportunity to dive deeper into LACMA’s collection, expand her knowledge in her specialty area, develop the methodology to eventually plan her exhibition and earn a graduate degree — a key factor in her becoming a curator.

Raised in Phoenix and Scottsdale, Lawson grew up immersed in art. She loved to draw, and her mother, a high school teacher, taught herself darkroom printing. “Wherever we were living, she’d always set up a few trays of chemistry in the bathroom and laundry room,” Lawson says.

“I was wealthy in support, which honestly is really profound,” Lawson says. “And I’m super lucky and grateful to have had someone who supported my interest in art, because a lot of families don’t think that that’s a legitimate career path.” 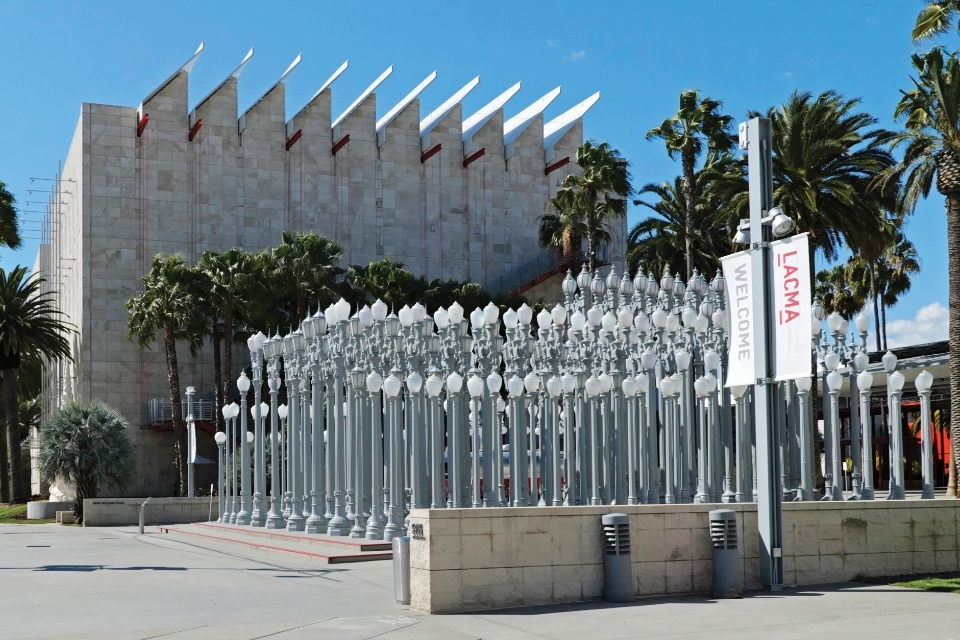 The Los Angeles County Museum of Art, where Lawson works as an assistant curator, is the largest art museum in the western United States, with more than 147,000 works in its permanent collections.

Lawson experienced several transformative moments during the three-year fellowship. One was in a course taught by Angélica Afanador-Pujol, an associate professor of art history and museum studies, and program director at the time of launch. In the class, “(Mis)representing Justice: Art, Law and Censorship,” Lawson tested an idea that became a chapter in her thesis and an exhibition theme. She wrote a paper tracing the aesthetic connections between contemporary LA artist Mark Bradford and Sammy Baloji, a photographer from the Democratic Republic of Congo who now works in Europe.

It was an aha! moment — identifying speech and silence as particularly powerful and poignant for Black peoples.

“The stakes of when to speak and when not to are really high. Looking at artists’ work across the diaspora, many were portraying people who had been killed or lived out a dangerous reality,” she says.

“She often talks to the artists and cultivates these relationships to bring these works to the forefront,” Afanador-Pujol says. “The fact that she is at LACMA, she is able to put these works in the center stage of the art world, which hasn’t always been the case.”

While developing her thesis, Lawson also worked closely with Olga Viso, a renowned curator and scholar who serves as the senior advisor for global partnerships in the arts at ASU’s Herberger Institute for Design and the Arts.

“It was clear that as her thesis was being developed, that it would be a terrific exhibition,” Viso says.

After graduating, Lawson presented her proposal to LACMA’s curatorial advisory group before the show was formally added to the museum’s calendar. Lawson’s exhibition will help shape, broaden and diversify LACMA’s collection.

“I’m proud that LACMA recognized the strength of her voice and has given her an opportunity to put that research to action really quickly,” Viso says. “That’s going to be a huge contribution.”

While working on the exhibition, Lawson does artist studio visits, researches venues for possible collaborations, plans the visual layout of the show and identifies artworks that would be meaningful inclusions in the museum’s permanent collection.

“Right now, I’m in the process of making acquisitions, either through fundraising events or through the support of individuals,” Lawson says.

Viso describes Lawson’s curatorial work as “potent and clear” and says, “I’m just so thrilled to see her rise within the field because I think she’s really going to be an important voice.”

As she continues to plan, Lawson is brimming with ideas for future exhibitions. Most importantly, Lawson wants to continue her work expanding LACMA’s representation of art practices, and find even more connections across time periods, places and cultures.

“Now that I’m formally a curator, every exhibition is an opportunity to share something with the public and to make a statement, to hopefully inspire some magic, some joy, to highlight something that isn’t widely being published or talked about,” she says. 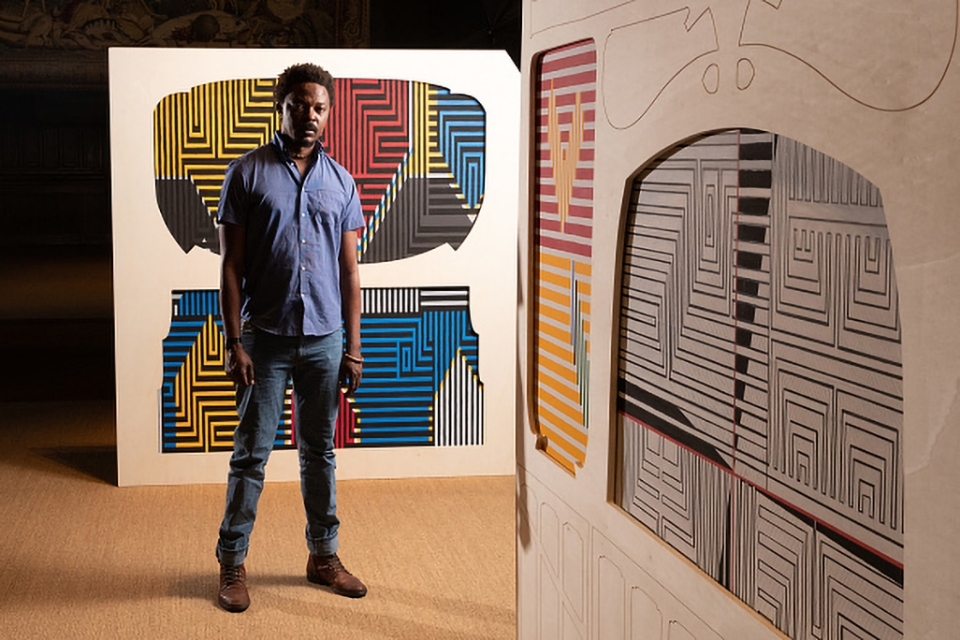 According to Los Angeles County Museum of Art assistant curator Dhyandra Lawson, here are five artists to check out:

Take a look at upcoming exhibitions and sign up for email notifications to include Lawson’s exhibition which will be on view Nov. 12, 2023 to March 24, 2024 in LACMA’s Broad Contemporary Art Building. Go to lacma.org.

Story by Makeda Easter, previously a staff writer at the Los Angeles Times, covering the arts.

Photos by Stephen Denton, a commercial photographer located in Los Angeles whose clients include The Guardian, ESPN, The Wall Street Journal and Forbes.