Photographer and digital montage artist Stephen Marc has been named a 2021 Guggenheim Fellow in photography by the John Simon Guggenheim Memorial Foundation.

Marc is the fourth faculty member in ASU’s photography program to be named a Guggenheim Fellow; he joins Mark Klett, Betsy Schneider and Liz Cohen.

“Stephen is an extraordinary photographer doing essential work,” said Herberger Institute Dean and Director Steven Tepper. “I think the story of Stephen Marc is a story about discovering our common humanity in the face of polarization — something we need desperately now.”

“This wasn’t my first time applying,” Marc said. “I also never expected to get it. I wasn’t doing the work for the grant; I was doing it for myself. You have to have tough skin as an artist. You get rejected all the time. But it’s better for them to reject me, than for me to reject myself by not applying.”

Marc, who teaches in ASU’s School of Art, in the Herberger Institute for Design and the Arts, received his MFA from the Tyler School of Art and his BA from Pomona College, and taught at Columbia College Chicago before moving to Arizona in 1998. He has received fellowships and awards from the Arizona and Illinois Arts Councils, Arts Midwest/National Endowment for the Arts, Aaron Siskind Foundation, the Gibbes Museum’s 1858 Prize for Contemporary Southern Art, Society for Photographic Education’s Insight Award, and the Seagram’s African-American Perspectives Commission Award. His work has been exhibited at the Museum of Contemporary Photography, Brooklyn Museum of Art, Phoenix Art Museum, National Underground Railroad Freedom Center, Chicago Cultural Center, Southeast Museum of Photography, Smithsonian Institution and more; he has completed residencies at the Center for Photography at Woodstock and at the CEPA Gallery in Buffalo, New York, and has published four books.

His 2009 book, "Passage on the Underground Railroad," explores the routes freedom seekers took to escape from slavery and is the name of his registered interpretative program of the Network to Freedom division of the National Park Service. During his research for “Passage on the Underground Railroad,” Marc explored numerous underground railroad sites and plantations with remaining slave quarters. He frequented antique stores around the country to find historical documents and other artifacts including shackles, slave tags and a collar with the slave owner’s address in New York City that helped solve mysteries of the peculiar institution.

For his newest book, “American/True Colors,” Marc has traveled extensively across the country. Documenting who we are as Americans, he has photographed a range of public space events from everyday life to commemorations, parades and political happenings, including covering Black Lives Matter protests and Trump rallies.

“The country has changed a lot, and how it sees me is different than how it viewed the seminal American project photographers like Walker Evans and Robert Frank,” he said. “You know you’re going to get challenged, especially as a photographer. People are concerned with how you are going to portray them. I get up close, use a wide-angle lens so I can gain a better understanding the situation and talk to people.” 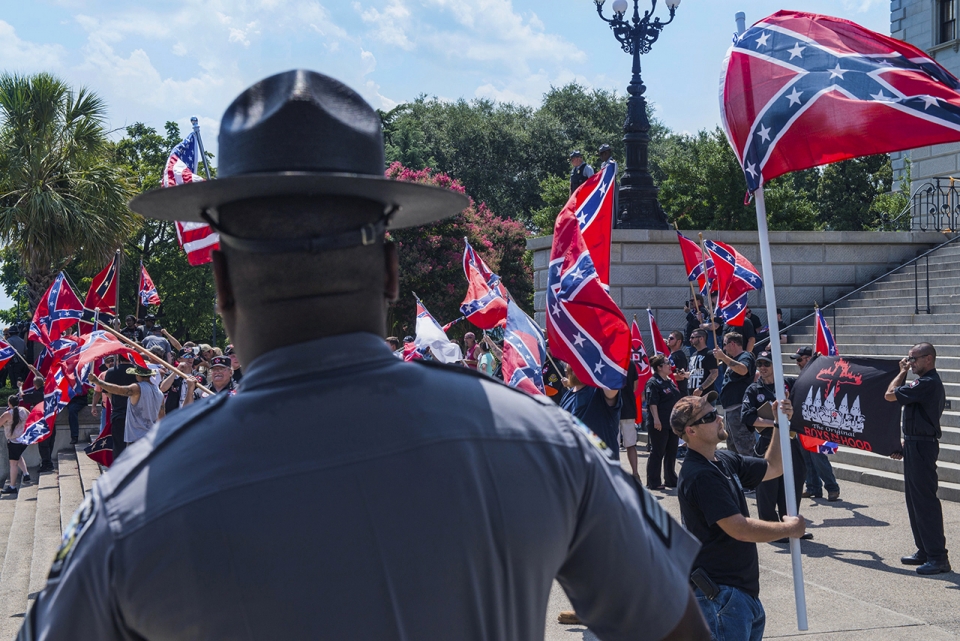 A KKK rally on the Capitol steps in Columbia, South Carolina, one week after the Confederate flag was removed in 2015. Photo by Stephen Marc

Marc said he knows the importance of seeing people as individuals, rather than their just their skin color, appearance or political affiliation. As he travels around the country back to places he has photographed before, he often runs into old friends that remember him from the last time he was there. He makes a lasting impression on people.

One piece of advice Marc gives is this: “Before you go out and photograph, just stop and think what assumptions people are going to make about you and how they might challenge you. You need to understand who you are and where you are going, to avoid being taken off guard. Even though I’ve been in some rough situations, the positive experiences far outnumber the negatives.”

Marc was selected as a Guggenheim Fellow from among almost 3,000 applicants, through a rigorous peer-review process. Another fellow award winner, Sama Alshaibi (a professor at the University of Arizona), is one of Marc’s former students from Columbia College Chicago.

As a professor, Marc said he likes being able to share his process with students and gives them an idea of what it takes. He wants to help them develop ideas, and learn how to pace themselves for the long haul and how to get past rejections. “I like when they really pull it together.”

So, what’s next for Stephen Marc?

“I want to create a body of work of updated inclusivity of the country,” he said. “My next work will focus on how we are rebounding from the election, COVID-19 and George Floyd, and how the country is going through dramatic changes.”